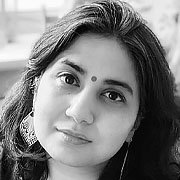 Bhavika Bajpai has over 16 years of experience in VFX and has worked on over 35 films for some of the world’s most prestigious visual effects studios doing surfacing, texturing, lighting, and fur grooming. She started her career as a surfacing artist at Rhythm & Hues before moving into texturing and fur grooming — and then leading a team of over 20 artists. At R&H, she worked on many films including the Academy Award-winning Life of Pi and The Golden Compass. She later moved to London where she worked at Framestore and more recently at The Moving Picture Company as Fur Groom Lead. At MPC, she focussed solely on fur grooming for almost 6 years, working on photorealistic creatures on films including The Lion King and Pirates of the Caribbean: Salazar’s Revenge.