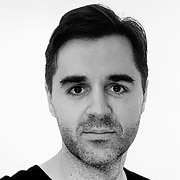 Matthew Savage has worked as a concept artist for the film and television industry for the past fifteen years working in such diverse departments as costume, props and weapons, vehicles and set design. Based in the UK and trained as a product and multimedia designer, upon graduating Matthew moved instantly into the film industry where he started as a 2D concept artist on season one of Doctor Who for the BBC. Transitioning into movies and introducing 3D software into his workflow, Matthew has worked on features such as The Dark Knight, Prince of Persia, Kick-Ass and X-men: First Class within the art deptartment and Prometheus, Thor: The Dark World and The Martian within the costume dept. Matthew is currently working for Lucas Film as a weapon and prop designer for features including The Force Awakens, Rogue One and The Last Jedi. He lives in the south west of the UK with his wife and two children.