In this lecture, Luca Nemolato shares his creative pipeline for the design of a futuristic sci-fi costume. Using the myriad techniques and software that he has learned during his career, Luca begins his concept in ZBrush, showing the power of designing in 3D and developing the idea while sculpting. This exercise teaches you to imagine your concepts in three dimensions from the start, making your workflow quicker and more efficient. Luca then poses the model as another phase of the design process, while still further developing the design. From there, the lecture focuses on how to present your 3D model to a client with basic rendering in Keyshot. Luca shares all of his realistic rendering techniques for the realization of the final concept. He then jumps into Photoshop where the final magic happens. All of the Keyshot renders get composited with Luca’s various tricks and tips, giving you the tools and techniques to realize your next costume design. This lecture covers a pipeline that includes sculpting and posing in ZBrush, Rendering in Keyshot, presenting your 3D model to a client and creating the final realistic concept art using Photoshop. 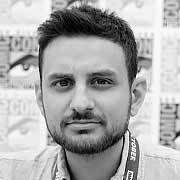 Luca Nemolato is an Italian Concept Artist working for film, television, video games, and commercials. He’s worked professionally in both Italy and in the US, where he is also a member of the Art Director’s Guild, the Costume Designers Guild, and the Animation Guild.

Luca started his education in Italy where he studied fine art, specializing in painting and sculpting. He graduated in 2010 and then continued his education in the US when he moved to Los Angeles to study with some of the best concept artists in the industry, including Jerad Marantz and Aaron Sims. He has since made a name for himself working on such projects as The Shape of Water, Jungle Cruise, Black Adam, HBO’s Westworld, the Middle-earth: Shadow of War video game, and many other world-renowned credits.